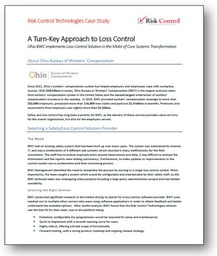 We have released a case study profiling the successful implementatition of the Risk Control Technologies platform with the Ohio Bureau of Workers' Compensation.

With $28 billion in assets, Ohio Bureau or Workers’ Compensation (BWC) is the largest exclusive state fund
workers’ compensation system in the United States and the second largest underwriter of workers’
compensation insurance in the country. In 2015, BWC provided workers’ compensation coverage to more than
252,000 employers, processed more than 116,000 new claims and paid out $1.9 billion in benefits. Premiums and assessments from employers was slightly more than $2 billion.

Download the case study from our resource library below.